Xiaomi Mi Watch; It’s Almost There!
Quick One
The Mi Watch is packed with enough features for the simple user who wants a heart rate monitor that's stylish and with a nice screen. You'll get up to 2 weeks of battery life and is ideal for runners and the budget techie in you. RM 469 is a fair price, but I would think it should be RM 399 - 429 if Xiaomi wanted people to choose this over the Mi Watch Lite, which is RM 220 cheaper.
3.5
Mi Watch - Xiaomi

A Good kind of basic

I previously reviewed Mi Watch Lite and it proved to be a really simple and lightweight wearable that’s easy on the eyes and wallet. I decided to up the ante and see if the it’s worth paying the extra few hunnit Ringgit for the bigger and smarter Mi Watch. I mean, it’s already a wildly competitive wearable market, especially in Malaysia. Xiaomi might be late but their value and branding does carry some weight, especially with how quick the Mi Bands were adopted when it first launched officially in Malaysia.

The screen is a 1.39-inch AMOLED curved screen that supports touch display that’s encased with just the right amount of plastic. Apart from using the screen to navigate, you’re also able to use two buttons on the right side to navigate through things, much akin to the G-Shock experience. The display alone is quite the jump compared to the Mi Watch Lite, being noticeably sharper and brighter.

Now with 100% more roundness than the Mi Watch Lite!

The watch feels light on the wrist, and being a sandwich of plastic and rubber, it gave me a feeling that it’s ready to face the rain and snow without weighing your wrist down.

Aside from the watch aspect of it, the experience relies heavily on the software side of things. You could use the Mi Watch on its own, but if want to actually monitor your fitness, sleep, and overall data, you’re definitely going to need to download the Xiaomi Wear app onto your device.

You start with a couple of watch faces which are pretty generic a lot nicer than the Mi Watch Lite’s. You can download the Mi Wear app on iOS or Android to download more watch faces should you want something different. First of all, the Watch Lite does not have third-party app support, but it does have every basic applet inside, from a compass to weather, alarms and timers, to even being able to control your phone’s music playback.

The Xiaomi Wear app has a user friendly interface, with a general dashboard to view everything you’d typically track, such as sleeping, heart BPM, steps and calories. The Mi Watch offers a lot more measuring than the Mi Watch Lite, such as Blood Oxygen Levels and constant BPM monitoring. I found it particularly useful for when I feel like my hearts racing from either stress or exhaustion from running. This ties in well with the stress meter, which measures your stress level throughout the day if you set it so. I’m not quite sure what to make of this, as I usually know when I’m going through stress. Perhaps it’s a wake up call for me to start meditating again.

Apart from that, the app also enables your phone’s notifications to be pushed to the watch for quick glances. This function is not new, but it’s proven to be particularly useful during workouts when you don’t want to whip your phone out to check on your messages and stuff.

Stretch and you’ll get 2 weeks on a charge.

Obviously, I’m not going to tell you that it could last longer than the Mi Watch Lite. With more sensors and monitoring, it’s definitely going to take up more juice. However, it’s not like you’re going to charge it on the daily. In fact, you’ll probably charge it just once a week on its proprietary charger and forget about it after awhile. Xiaomi did promise up to 16 days of battery life, but I was only able to achieve 14 weeks on near minimal monitoring practices. It’s achievable, but you essentially have to reduce it to just being a pedometer with a watch function.

Charging it back to full takes about 2 full hours so I do recommend charging it overnight if you don’t have time in the morning to do so.

Should you buy it?

Look, it’s no medical device (as the Watch says), but it gives fairly accurate insights about your daily status with the added bonus of fitness tracking. It’s not as granular as HUAWEI’s Watch FIT or G2 PRO, but it’s clear that it’s aimed for runners and the occasional weightlifter that doesn’t wanna splurge too much on a good quality wearable. RM 469 is a good price for a semi-smart watch like this, and with easy accessibility to 3rd party straps, it can fit any personal style, be it sporty or casual.

The Mi Watch is packed with enough features for the simple user who wants a heart rate monitor that’s stylish and with a nice screen. You’ll get up to 2 weeks of battery life and is ideal for runners and the budget techie in you. RM 469 is a fair price, but I would think it should be RM 399 – 429 if Xiaomi wanted people to choose this over the Mi Watch Lite, which is RM 220 cheaper.

It’s a simple and stylish wearable that’s easy to match outfits to and keep your life on track, from sleep to stress! 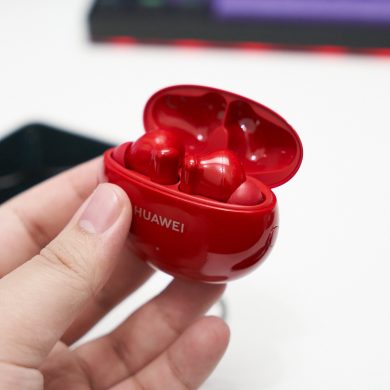 HUAWEI FreeBuds 4i: the budget king of ANC